The longlist has been announced for the 2017 Stella Prize, awarded each year to great writing by Australian women. This year, out of a dozen titles chosen, there are four fiction (three novels and one short-story collection) and eight nonfiction books (five of which are memoirs).

We currently have half of the list in-stock, and by next week we should have the full long list. The Stella link to each title below has a plot summary, an author bio and a Stella judges’ report — so you can find out what all the fuss is about. Do get in touch if you want a longlister put aside.

Fiction
Between a Wolf and a Dog by Georgia Blain (TP, Scribe- $30)
An Isolated Incident by Emily Maguire (TP, Picador – $33)
The High Places by Fiona McFarlane (TP, Hamish Hamilton – $33)
The Museum of Modern Love by Heather Rose (PB, Allen & Unwin – $28)

Tagged as The Stella Prize

Free tickets to the Comedy Fest with Xavier Toby

Xavier Toby’s “Minding My Own Business”

Stand-up comedian Xavier Toby tells us all about the real world of the FIFO (fly-in-fly-out) worker in Western Australia’s mines. His memoir, Mining My Own Business, covers his stint onsite, somewhere in Australia, which he survives with the banter of his mates Damo, Pando, Jonno, Robbo, Donk, Jokka and Dale. Smart-arsey and heavily spiced with f-bombs and c-bombs — this is bloke’s territory, mate — it’s a great insider’s view of the faraway FIFO world.

Until April 19, lucky buyers also get two free tickets (worth a total of $40) to Xavier’s two shows in this year’s Melbourne International Comedy Festival — stand-up show “‘Mining’ My Own Business”, and the comedy walking tour “2014 – When We Were Idiots”. Details available when you get your copy of Mining My Own Business ($25). 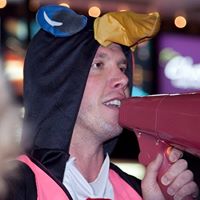 An Officer and a Spy – Robert Harris 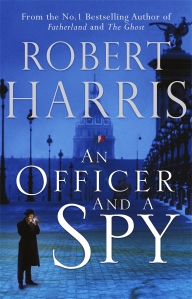 Robert Harris always does a super job with his historic novels – Enigma, Archangel, Pompei, Lustrum, Imperium etc.  This one is no different.  The Dreyfus affair was a corner stone of French public affairs around the turn of the century and informed much public opinion till after the first world war.

Alfred Dreyfus was a Captain in the French army, of Alsatian Jewish background, and was wrongly convicted of passing military secrets to Germany.  He was imprisoned on Devil’s Island near South America having been ‘degraded’ – stripped of rank and social standing.  Seemingly a minor matter in the country’s affairs, it came to have huge effect on the Army, French society, politics and government.

One of the main players from the Dreyfus Affair is Lieutenant-Colonel Georges Picquart who discovered the real culprit  responsible for the espionage of which Dreyfus was convicted.  Picquart is the author’s narrator and the book is written from his perspective.  Picquart suffers greatly for his involvement.

This minor episode of French history is turned into a compelling thriller with all the elements you might find in a James Bond novel!  There are few gadgets and no car chases but otherwise it’s all there and ALL TRUE!  The dialogue and some details are the stuff of fiction, as are the personal reflections and responses of all the characters.  That serves to bind, season and flavour the facts which will be surprising to most, apart from European history scholars.

The UK Guardian said…
“Against the odds, the [book] is both gripping thriller and Buchan-esque adventure: its revelations impeccably paced and its original material used to poignant effect”

to hear Robert Harris talk about his book — 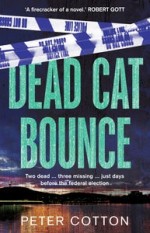 Don’t forget to come along to the Preston Library tonight at 7pm to meet Peter Cotton and hear him talk about his first novel, Dead Cat Bounce. The book is an edge-of-your-seat murder mystery where the dead body of a government minister is discovered in Canberra during a federal election campaign, and suddenly everyone in Parliament House is a suspect. A signed copy could be just the thing for a Father’s Day gift!

A few years ago, Penguin released their bold orange striped Popular Penguins – a great selection of older and more modern classics that sell for only $9.95. Since then, we’ve also had the pink Popular Penguins, released to benefit the McGrath Foundation. And now we have the green Popular Penguins, a fantastic collection of 50 crime classics, which, like their orange cousins, are also a bargain at $9.95 each. If you’re a crime fiend they’re well worth perusing, as there’s a fabulous mix of old and new, established and less well-known authors, so you’re bound to find a great read! To celebrate their release, we have a handy green canvas tote bag to give away with every three green Popular Penguins purchased, while stocks last. Maybe something to keep in mind with Father’s Day fast approaching?

If you remember the cold war and had any connection with England you may recall the British contributions to the cold war ‘nuclear deterrent’.
The Vulcan bombers were a prominent symbol of Britain’s military power and in alliance with the US and other NATO allies they were in the frontline against the march of communism for 25 years.
Under the Radar tells the story of the pilots and crew of a Vulcan squadron, starting in the 60s and moving in stages through to the current day.   The beginning reads much like a non-fiction account of ‘war games’ with the Americans with whom the Brits ‘fought’ in testing situations to measure each others capabilities, to prepare for the ‘real thing’, should it ever happen. Descriptions of the unpleasant conditions for the crew on the flight deck, send a chill, even long after the ‘Cold’ war.  It wasn’t made easy for the airmen to do a good job and the safety of the Western World depended in part on their performance..
Evading the fighters scrambled to intercept them, the British aircraft target Washington and New York, reducing them to ‘virtual’ smoking ruins, with the help of new technology and old skills.  The crews return home to Wearsby aerodrome – to their friends, ground crew, girl-friends and wives.  NO female aircrew in the 60s! Housing was communal for the single men and drab in the married quarters.  Life for the women was tedious, constantly fighting the other ‘love’ in their men’s lives.  The author gives us a flavour of their lives through the eyes of Amos McKenna wh, in common with most of the personnel, is stressed with training, tests, danger and his personal life. His wife, Jo, like all the other airforce women,  strives to be recognised and create a life apart from timetables, aviation fuel smells and boyish pranks.
Add to this mix drunken parties, sexuality, infidelity and spies and it’s easy to think we’re lucky the ‘deterrent’ remained just that – never to be tested in real battle.
Amos starts the book as a top gun Squadron Leader and finishes as a retired senior civil aircraft pilot but with his life moulded and changed completely by a life in the air.
Under the Radar is an intriguing account, based on some real events, of the beauty and danger of Airforce flying in the second half of the 20th century.

Fairfieldbooks On Station
Create a free website or blog at WordPress.com.