And the winner of the Indie Book of the Year is… Jane Harper’s The Dry: for the best Australian writing of 2016, as chosen by Australian independent booksellers. Our congratulations to Jane — we’ve barely been able to keep her book in stock since it came out!

Other prize winners this year:

All titles in-store now, or on order in desperate haste if we’ve sold out! Let us know if you want any of the prize-winners put aside for you, and come enjoy some great Australian writing.

This book came as a very pleasant surprise. I’ve long been a fan of Holly Throsby’s music, so I was happy to hunker down with her first novel, Goodwood. Set in a fictional NSW town of the same name, the story follows one sad and unusual summer in the sleepy town’s life. Seventeen-year-old narrator Jean tells us about fishing, the high school assembly, Davo’s sleazy uncle from Albion Park, and what happens when Rosie from the chip shop and Bart the much-loved butcher both disappear in one short week in 1992… and all the secrets that are revealed until they are found.

Goodwood is a laid-back, loving portrait of a small town, where each individual has their place be they good or bad. Each character is well-drawn, the early ’90s are realistically described, and Jean’s voice is just spot-on. Less a crime novel than an untangling of relationships, despite the untimely disappearances, Throsby’s plotting and portraiture make this a great, easy read. And since she’s a good feminist (Happy International Women’s Day, everyone) all the wife-beaters and slimeballs get treated with the respect they deserve.

I whipped through most of this in one read, and highly recommend it to those seeking some sensitive Australiana (as The Age thought) or a light-but-deep read. The book is also shortlisted for the Debut Indie Award, due to be announced in a couple of weeks, so fingers crossed for Holly. Enjoy!

PS And if you’re interested in Aussie crime, don’t miss out on the event at Northcote Library tonight!

That’s our best books for 2016, all wrapped up. Why don’t you comment or post to let us know your favourites?

The Fairfieldbooks staff have put our heads down, and we’ve each come up with our five top titles for 2016. You can see most of our choices in the lovely display (above). We’ll post one list every day over the next week, and do come in and tell us what your favourites have been this year! 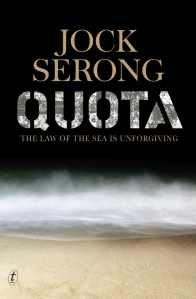 Disillusioned with his legal career, dumped by his fiancee and down in the dumps generally, Charlie Jardim is thrown a bone by his mentor Harlan Weir. It involves going to a small town which is divided between the people who have an abalone fishing licence, and those who don’t. There has been a murder and Charlie is to help prepare a witness for the prosecution. He finds Dauphin is a town where loyalties are long established, but fragile for all that. Les the publican at the pub, strangely called the Norman Woes takes Charlie under his wing, but the rest of the town regard the outsider with suspicion.

The murder occurred between abalone fishing competitors, both of whom were involved in going over the ‘quota’ for the product. As well as the illegal abalone trade, a spot of drug running had been muddying the waters, so to speak, and the money involved has been getting bigger and bigger.

Charlie’s witness is nervous, and has changed his testimony, making him a target of violence in the town. Charlie himself earns himself no favours amongst the townsfolk.

A lot of the book takes place in the court room, with a lot of courtroom procedure and evidence being explained which could flag, but doesn’t.The big character barristers you hear about it get an outing in the book, and their antics, along with those of the Judge are very entertaining. Charlie is a character to like, and I can see a sequel coming where he gets back on track with his career, or maybe not. Quota makes a welcome change from the police procedural crime novel with it’s country and court room settings and is a good choice for a crime fiction fan. Recommended. $30

Picking up where The Old School left off, Beams Falling ($30.00) sees Detective Nhu ‘Ned’ Kelly recovering from physical trauma as well as PTSD. But she’s soon working in Sydney’s Cabramatta . It’s 1993 and there’s been a surge of crime in the area, brought about by new Vietnamese drug gangs. her colleagues think Ned’s the one for this job, given her Vietnamese heritage, but she not only has to confront the violence, drugs and murder in her suburb, but deal with her mental health as well as police corruption.  The sense of place in Beams Falling is tangible – and it’s unapologetically honest and grim. Her characters are so well-realised, and a plot so snappy you won’t be able to put this down. Newton is such an exciting new – well, new-ish, this being her much-awaited second novel – voice in Australian crime fiction.

Fairfieldbooks On Station
Blog at WordPress.com.